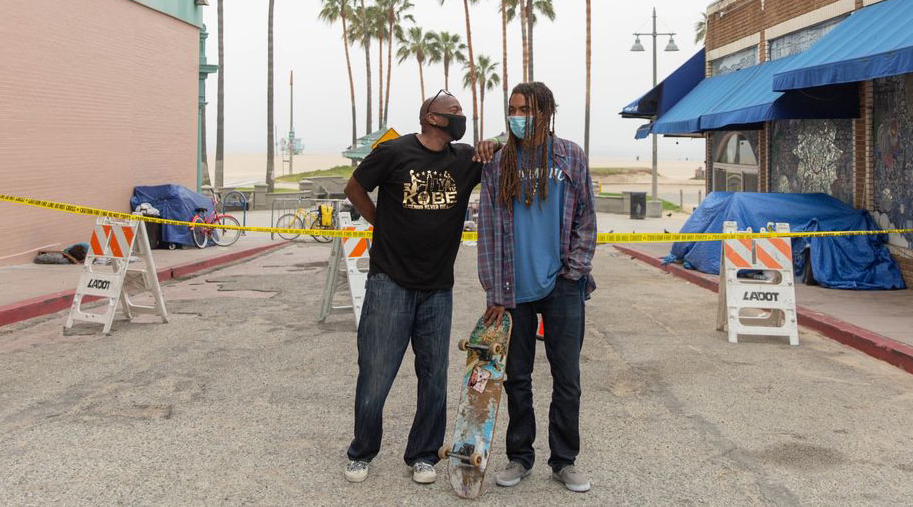 For more than a year, Conrad Wallace had been sleeping in a van, at the beach or on Los Angeles’s notorious Skid Row, where he was badly injured in a stabbing last year.

But since Saturday, Wallace, 59, and his son, Calvin, 21, have been bunking at the two-star art-deco Cadillac Hotel in the city’s Venice Beach neighborhood.

“We don’t care if we eat every day. What was our No. 1 priority?” Wallace said, turning to his son during a video interview. “We already got it. A place to stay.”

The coronavirus pandemic has done what years of bond measures, housing referendums, community meetings, and campaign promises failed to: provide housing quickly for some of the tens of thousands of homeless in the country’s second-largest metropolis.

Since the virus began its spread in California, state and community officials have rushed to find shelter for a population at high risk both for catching the disease and spreading it. Governor Gavin Newsom launched an initiative called Project Roomkey, which was designed to quickly lease 15,000 hotel rooms for the homeless statewide.

Los Angeles officials turned two dozen parks and other city facilities into shelters for some of the area’s estimated 58,000 homeless people. As of Wednesday, the region also had 1,350 of them sleeping in more than 20 hotels, with capacity for hundreds more.

Statewide, more than 12,600 of the authorized hotel rooms have been leased and 1,200 recreational vehicles delivered to communities for use as temporary shelters. Newsom has banned evictions based on nonpayment of rent.

“If there was a silver lining to this entire crisis, it’s this emergency response,” said Heidi Marston, interim executive director of the Los Angeles Homeless Services Authority, a joint city-county agency. “They always say, ‘Never waste a good crisis.’”

Emily Uyeda Kantrim, associate director of the nonprofit Safe Parking LA, which finds spaces for homeless people with vehicles to sleep in, said she’s seen a change in attitude over the past month. She was shocked at how quickly officials responded. They traded text messages with her over the weekend to find two of her clients — a mother and her son with breathing issues — a hotel in the Los Angeles suburb of Lynwood.

Newsom has said Federal Emergency Management Agency funding will cover 75% of the cost of the leased rooms, including money for laundry, security, cleaning, and food. The California legislature allocated $150 million in emergency funds for additional support, though city and county sources are also being tapped.

“Breakfast, lunch, and dinner are provided,” said Va Lecia Adams Kellum, chief executive officer of St. Joseph’s Center, a homeless services center that administers the program at the hotel where the Wallaces are staying. “There’s a caterer that brings food, and nurses take temperatures during the foodservice.”

Los Angeles County, with over 10 million people, is to some degree the epicenter of the nation’s homeless crisis. A report last year from the White House showed the region accounting for the largest share of the 553,000 homeless people across the country.

Of course, the 2,200 Los Angeles County hotel rooms leased so far fulfill just a fraction of the need. Even before the pandemic, 130 people a day were moving into some form of housing, but 150 were losing their shelter, according to Amber Sheikh Ginsberg, who runs a City Council district’s working group on homelessness.

Encampments lie below highways, in parks and sometimes on busy boulevards, where the people set up lawn chairs and even potted plants.

Voters in the city passed a $1.2 billion bond measure and related sales tax in 2016 and 2017 to fund housing for the homeless. After many delays, the first 62-unit project opened in January.

Local officials face challenges including federal court orders that prevent them from kicking the homeless off the streets, soaring rent and housing prices, and neighbors who don’t want shelters nearby.

Mayor Eric Garcetti, facing withering criticism for his handling of the issue, formed a war room this year to address the crisis. Nearly every candidate in the March 3 city election addressed the crisis in mailings to residents.

Even now, Skid Row hasn’t been emptied. It’s still bustling with people, and many aren’t wearing masks or facial coverings.

Since Project Roomkey was announced, some cities have sought to block the leasing of hotels, and last week a housing-advocacy group sued in federal court to halt such actions.

“Elected officials are more willing to step into some of those fights if there are entities saying, no we don’t want this,” Marston, the housing official, said. “They’re really backing us up and saying this is the right thing to do.”

Even if the homeless don’t stay in these hotels past the pandemic, the present situation gives counselors an opportunity to work with them, according to Uyeda Kantrim, the housing advocate.

“This is the best time to converse with people and figure out what’s next because it’s as stable as they’ve been,” she said. “It’s an amazing undertaking and there will be bottlenecks, but no one that we’ve referred has been denied. There is money. And no one’s saying no.”

Marston said it’s important that the city builds on its initial success to find ways to help the many thousands still outside.

“We really didn’t have the interest of the business community and the hotel community in the way we do now,” she said. “This is an opportunity for them to bring their staff back to work and pay them and make money and keep the lights on.”

“Things look different in LA right now. There are more people inside, and it’s noticeable.”

For Wallace, the program has been a lifesaver. He had worked security at the Staples Center arena but has had trouble finding employment due to diabetes, high blood pressure, and the need to care for his son, who suffers from severe asthma.

Fast-food restaurants turned the pair away and buses wouldn’t let him ride because he didn’t have a mask, he said.

“I didn’t think it’d take this long, finding a place to stay,” Wallace said, wearing a Kobe Bryant shirt and sitting on a couch in his hotel room with his son. “When they put us in here, it was wonderful.”