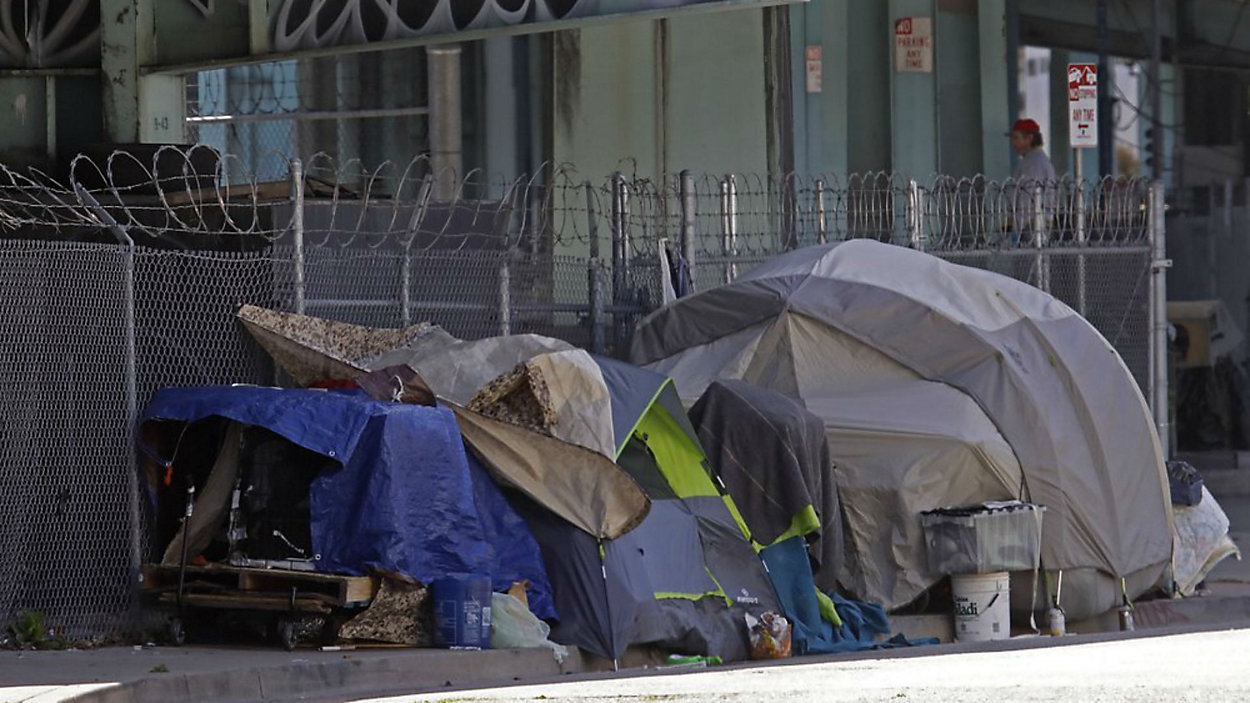 Homeless encampment seen on Monday, April 13, 2020, in San Francisco. Local governments have begun moving large numbers of homeless into hotels as part of Operation Roomkey. Among the requirements are that people get tested when they check in and that med

Among the more than 100 homeless people in an undisclosed hotel on the west side of Los Angeles are two residents who are in hospice care, said Va Lecia Adams Kellum, chief executive of St. Joseph Center in Los Angeles.

“Because of Project Roomkey these men are inside a comfortable room where they can get the comprehensive and palliative care they need and die with dignity,” Adams Kellum said in an email.

Meanwhile, the nonprofit continues to offer to-go meals and groceries for the needy.

While praising municipalities that have stepped in to find temporary housing for the homeless, Newsom said Saturday there were “equivalent number of cities” that are blocking efforts to help the homeless. He wouldn’t name them.

“Please consider the morality of those decisions, consider the moment we’re in and the ethical question you’re being called and asked upon, consider your station in life and in history. All of us will be judged,” Newsom said.

Los Angeles County prosecutors requested an emergency hearing with a federal judge Friday, alleging the cities of Lawndale and Bell Gardens threatened to terminate city permits for hotels and motels participating in the program.

Laguna Hills in Orange County is also pushing back against plans to move homeless people into a hotel, the Los Angeles Times reported Thursday.

In Los Angeles, where more than 30 homeless people have tested positive for coronavirus, medical teams will begin screening people for the virus on the streets, along with fast-result field tests, Mayor Eric Garcetti said. Those who are infected will be offered transportation to shelters and have hotel rooms set aside for them.

So far, San Francisco is the only city in California to report a large-scale outbreak at a homeless shelter, after more than 100 people tested positive, including 10 staff. None of the people was seriously ill when tested, but three have since been hospitalized, public health spokeswoman Rachael Kagan said.

The state also reported for the first time Friday that there are 3,500 confirmed cases, or about 12% statewide, in nursing homes or adult care facilities, where infections have spread quickly.

There have been signs the outbreak is slowing in the month or more since most of the state’s 40 million residents were ordered to stay at home. Social distancing rules are being praised for that development, but they have hit the economy hard, shutting down schools, tourist spots and most restaurants and retail businesses.

But some have chafed under the restrictions, including several dozen people who rallied in San Diego on Saturday against California’s stay-at-home order.

Newsom said he wasn’t opposed to the demonstrations but urged protesters to practice physical distancing while exercising their free speech.

“This virus knows no political ideology. It doesn’t know if you’re a Republican or a Democrat,” he said.

To start lifting restrictions and allow businesses to reopen, Newsom has said the state needs to test 25,000 people a day and better track those who are infected, up to about 20,000 a day now. Several areas have begun offering tests to people without symptoms. Until now, there’s been a shortage of test swabs and the chemical agents needed to process the tests.

“While California has excelled in so many categories, we have not in testing,” Newsom said Saturday in an online conversation with former President Bill Clinton.

“Right now, we’re not even close as a nation, let alone as a state, to where we should be on testing,” he said.