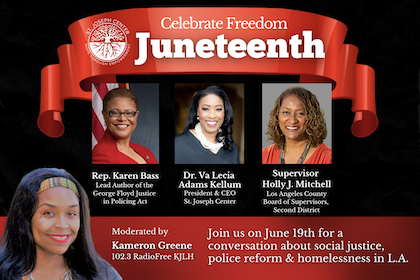 Celebration of Juneteenth and a timely conversation on social justice, police reform, and homelessness in L.A.

Arthur Kraus strolls along the boardwalk in front of his Venice home. He and his wife have lived in the area for years and lately have watched homeless encampments grow unchecked.

When Arthur and Rini Kraus bought their condo 19 years ago in Venice, every day was a postcard from paradise.

They took long walks, enjoyed gazing across open sea from their patio, and strolled to nearby restaurants for dinner. The neighborhood was funky, and even a bit sketchy, but their four sons and grandchildren were happy to drop by, and the beach was their playground.

A little over a decade ago, things began to change. The neighborhood took on some harder edges, more people began camping along the boardwalk, and the Krauses no longer felt as safe as they once had.

“I’d say it really exploded about three years ago,” said Arthur.
Tents multiplied, and the beach became an open-air clinic for the poor, the addicted and those in physical or mental distress.

“I see people wake up, lower their pants and go to the bathroom,” Rini said. “The beach is supposed to be for everybody.”

“I can’t even have my grandchildren here now,” said Arthur.
I visited the Krauses on Memorial Day, and Arthur agreed to take a walk with me, but Rini decided to stay home. She doesn’t like to venture south on the boardwalk any longer, because the scene is so disturbing.

“This is not civilization,” Arthur said about the sprawl of tents and trash.

When I described the Krauses’ situation to Va Lecia Adams Kellum, chief executive of the nearby St. Joseph Center, which does homeless outreach, she expressed sympathy. “My heart goes out to that family and I want to make it better,” she said, noting that a “failed investment in affordable housing and years of the wealth gap just being ignored” have led to this collapse.

In recent months, Coley King, a physician and director of homeless healthcare at the Venice Family Clinic, says he’s seen the mental and physical health of Venice’s homeless population deteriorate. “It’s kind of a perfect storm of a long pandemic and a lot of emotional stress from there not being enough housing,” he said.

One of the Krauses’ sons, Mitchell, told me he still visits his parents with his son. But they are more likely to stay in the house than they used to be.

“My parents are very socially liberal,” he told me. “They just want people taken care of, and they want the neighborhood to be nice for everybody.”

In the late ’90s, I lived several blocks inland and often rode my bike past the Krauses’ property. In the time since, the area has become both more gentrified and more of an epicenter of social collapse, two forces in natural conflict.

“Venice Beach, where I live, is on edge these days,” my colleague Robin Abcarian wrote just a few days ago, reporting on opposition — in the traditionally liberal stronghold — to a proposed affordable housing project that would sit one block from the beach.

City Councilman Mike Bonin, who represents the area, is one of the most persistent local officials in trying to address homelessness, and one of the most polarizing. His recent proposals to set up temporary campsites at beaches and parks have been both praised and attacked, and a recall movement is underway.

The Krauses intend to sign the petition, and when I asked what they’d tell Bonin if he had joined our conversation, Arthur was blunt.

“I could not even have a conversation with Mike Bonin,” he said, telling me he has sent numerous emails and photos to the councilman’s office without a response.

From the Krauses’ patio, during my visit, we looked out at dozens of tents and tarps, and at mounds of trash that were being stockpiled near the public restrooms. People were beginning to poke their heads out of tents.

One homeless woman, barefoot and in obvious mental distress, was caked in dirt. Another sat below the Krauses’ patio and bit into some pizza she fished out of the trash. A middle-aged man scratched himself as if he was under attack from bed bugs.

The Krauses have developed a habit of sitting low enough in their patio chairs to block their view of what’s just a few feet away. Instead, they look out on open water, with the Santa Monica Pier in the distance and the mountains wrapping an arm around Malibu. They can fool themselves into believing that Los Angeles has finally tackled its homelessness challenge, at least until they stand up, and L.A.’s greatest failure is spread out before them, as enduring as the pounding surf.

The Krauses’ condo is flush against the beach path, not far from the sand, and I told them there would be those who say that if you want to live that close to the beach, you ought to expect some company, for better and worse. Some readers, I told them, won’t have much pity for the poor people living in valuable beachfront property who don’t have the greatest view anymore.

Arthur, a financial planner and a Democrat, said his problem is not with the homeless people, but with elected officials who have the power to offer relief to both the housed and the unhoused, but have lost control. Every part of the city has people “who are for the homeless or against the homeless,” Arthur said, but there’s no consensus, or middle ground, or leadership.

“It’s gotten to the point where it’s not democracy anymore,” he said. “It’s anarchy.”

Does he have all the solutions? No. More housing, for sure, he said. But not at $500,000 per unit. What’s wrong with dormitory-style housing, he asked, at least transitionally, so more people can move indoors more quickly?

“You have to have a plan and you have to have markers. I don’t know what the markers are, but every month you need a report saying what progress has been made…. You have to keep score, and feet have to be held to the fire.”

Twice, the Krauses have listed their condo for sale but didn’t get any offers to their liking. Prices are depressed because of what’s happened to the neighborhood, Arthur said, and they’re not yet fully committed to leaving a place they fell in love with almost 20 years ago.

Maybe, with the right leadership, the neighborhood will be what it once was. 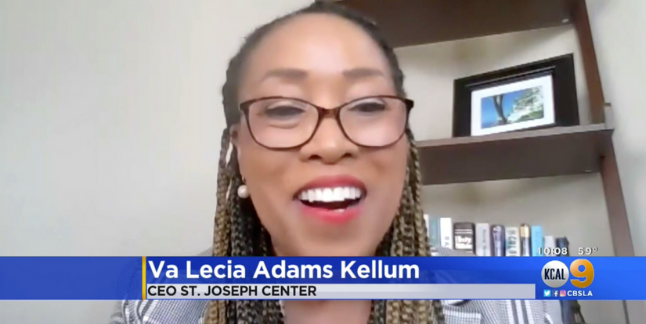 “When we find an innovative solution that helps the owner of a hotel, and the people who are staying, and the community that surrounds the hotel, that’s a win-win and I think that’s what Homekey offers,” Va Lecia Adams Kellum

SAN DIEGO (CBSLA) — From fed up residents to homeless encampments lining the streets, the homelessness crisis across the state continues to grow, but Gov. Gavin Newsom now believes he has a plan that will get thousands of people off the streets with the help of $12 billion.

“What we’re doing here today is multiples of what any state in American history has committed to address the crisis of homelessness straight on,” he said during a stop in San Diego County.

The plan will expand Project Homekey, which includes $7 billion to buy existing hotels and motels that will provide 46,000 units — each costing about $150,000.

Los Angeles has been spending three times that building new housing for the homeless, but they take years to open. Homekey takes only months before people can move in.

“When we find an innovative solution that helps the owner of a hotel, and the people who are staying, and the community that surrounds the hotel, that’s a win-win and I think that’s what Homekey offers,” Va Lecia Adams Kellum, who helps run St. Joseph Center in Venice, said.

The center was able to house around 500 of the most vulnerable residents thanks to a similar state-run program during the pandemic.

“It’s gonna be so important, you know, to maybe start to see some real progress,” Adams Kellum said.

The plan was also applauded by Los Angeles City councilmen Mark Ridley-Thomas and Kevin de Leon.
The plan “will mean the difference between having a home and sleeping on the street for thousands of Angelenos,” de Leon said.

However, Republicans Kevin Faulconer, the former mayor of San Diego, and John Cox, who are both challenging Newsom in the upcoming recall election were both less than impressed.

“Homelessness has skyrocketed by 10,000 people since Gavin Newsom took office,” Faulconer said. “No amount of money will solve this crisis without a leader who has the political will to buck the status quo and take bold actions to get people off the streets and indoors to receive the help they need.”

But residents in Venice, who say they have dealt with growing encampments, violence and fires, have mixed feelings on how, or even if, the program will work.

“I think if you’re using dilapidated buildings and the owners want to do that and it’s far enough way from a school and residents, I mean, it seems like a viable option,” one woman said.

The money is a mix of federal dollars and a surplus in the state’s budget.

“This is an order of magnitude investment into transforming the homeless crisis in the state of California, to one of America’s most enlivening stories with the support and examples of people who are demonstrable proof that homelessness can end in our society,” Newsom said. 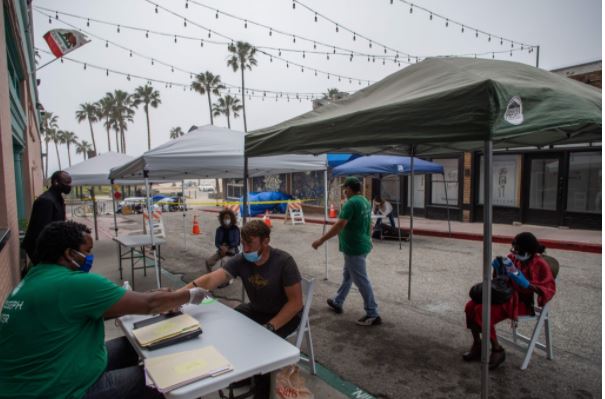 An executive order signed by President Biden made changes to how federal dollars are funneled towards municipalities.

We discuss what this change in federal funding means for homelessness initiatives in L.A. Plus, how has Project Roomkey been doing? Is its expansion the best way to move forward?

We reached out to Los Angeles City Councilmembers Nithya Raman and Mike Bonin, who introduced the motion, as well as Los Angeles Homeless Services Executive Director Heidi Marston, but none were available to join us at the time of our discussion.

GUESTS:
Ben Oreskes, metro reporter for the L.A. Times where he covers homelessness and housing; his recent piece is “‘Manna from heaven’: L.A. officials say Biden funding could get thousands of homeless off streets”

Va Lecia Adams Kellum, president and CEO of St. Joseph Center which works with working poor families, and homeless men, women and children; they are based in Venice and service L.A. County

To hear the full airtalk go to https://www.scpr.org/programs/airtalk/2021/01/28/66460/biden-s-federal-funding-changes-may-mean-more-mone/ 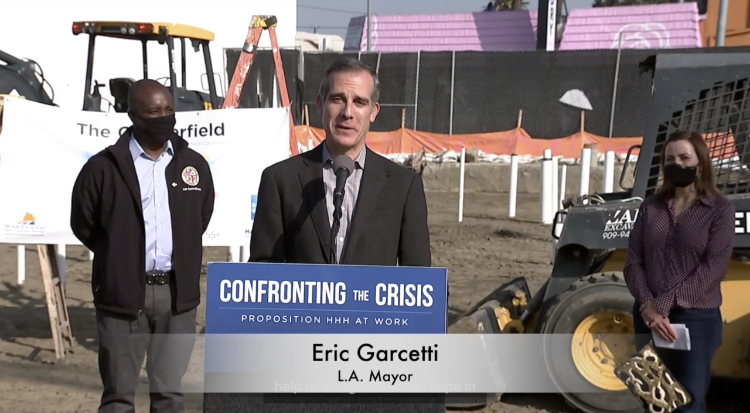